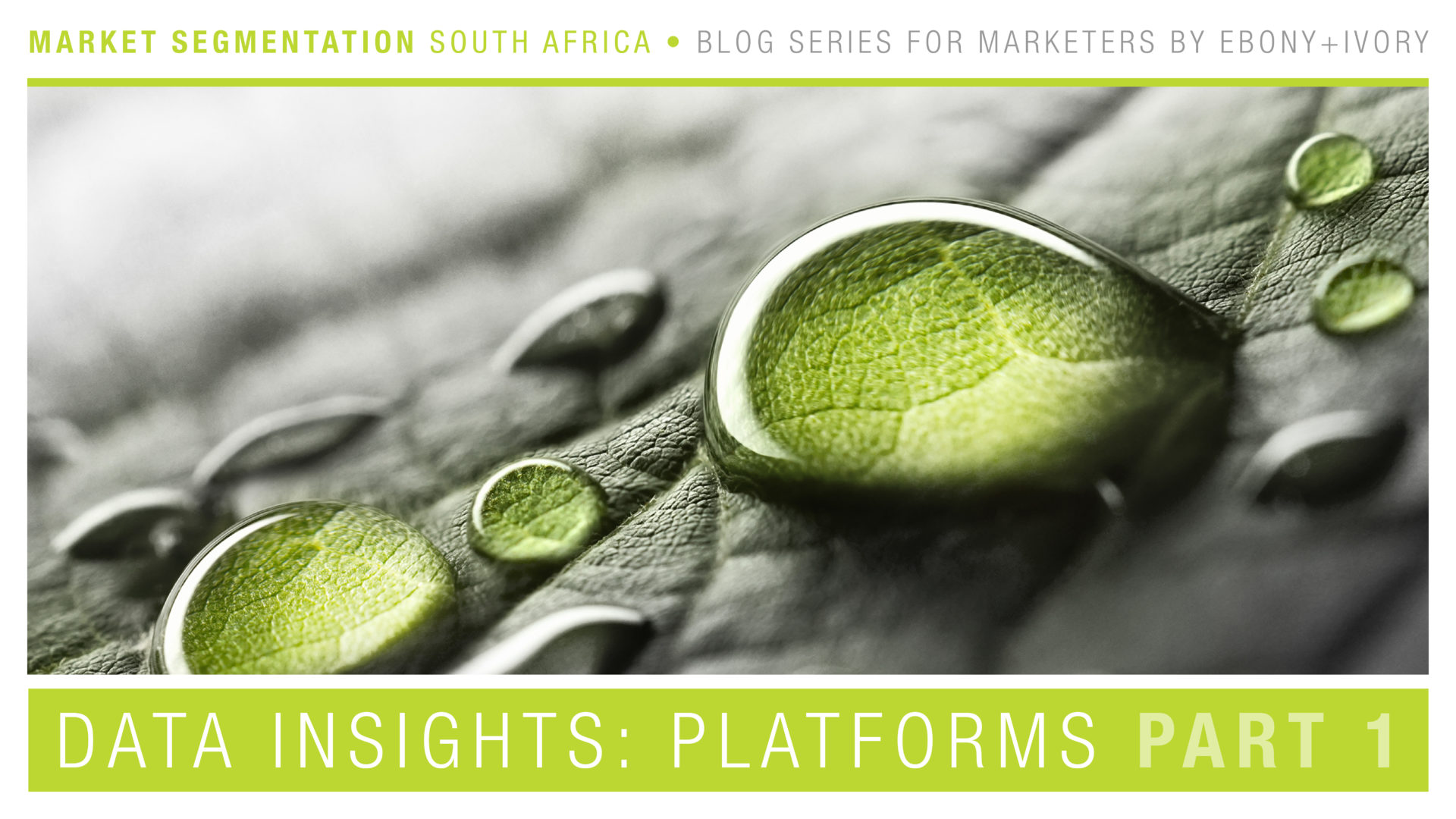 Moving from silo media planning to content mapping and a ‘value in’ instead of ‘cost out’ approach to media procurement.

Finding a logical starting point for an analysis of Platforms requires us to challenge the traditional understanding of Media Planning.

The historically misleading thing about Media Planning is that it implies that the medium itself is the place to commence the process. It’s essentially a throwback to the old chestnut from Marshall McLuhan, “the medium is the message”, which suggests to us that the media planner must simply get more media exposure: preferably for less money. Get the right balance of reach and frequency, add all the media numbers together, and you get a result.

However in a world where media distribution is ubiquitous, we are increasingly coming to understand that “the message is the message” and equally that “the message is content”. Increasingly the role of media strategists is to map out the optimal distribution of content across media platforms. Not just to maximise the total number of people exposed to the campaign but to maximise the relevance and impact of content delivery, at each and every point of the consumer interface. Not least of all at the point of purchase: whether that is in-store or online. 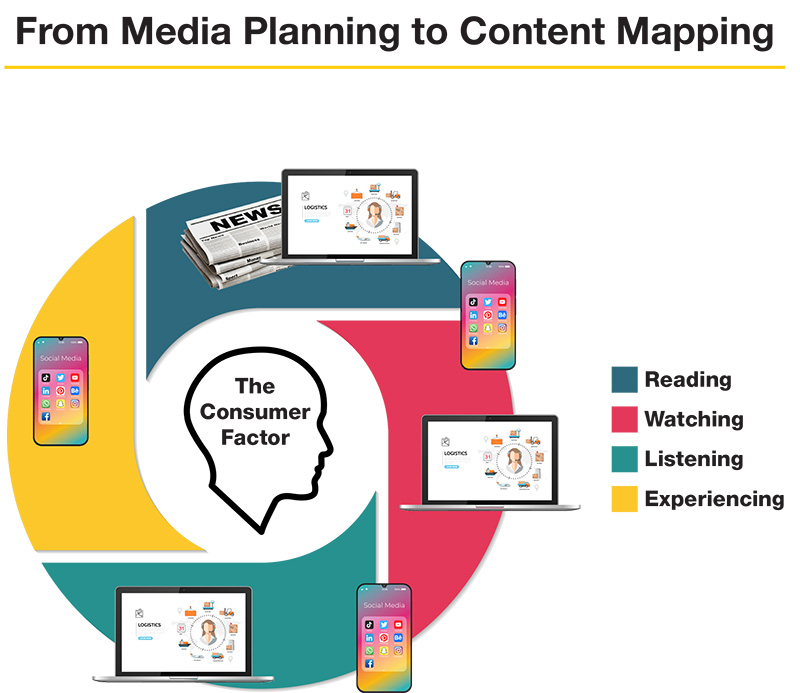 The “content mapping” approach is reinforced by the 2020 WFA (World Federation of Advertisers) Project Spring[1] which sets out to create a ‘value in’ instead of ‘cost out’ approach to media buying. A global best-practice approach towards computing actual Return on Media Investment (ROMI) rather than the value of discount savings.

Attribution modelling means that maintaining share of consciousness, rather than a relatively competitive adspend share of voice, becomes the yardstick of success. In the future, trying to sell media based primarily on audience size and discounted cost-efficiencies will be like running an advertisement for Dunkin Donuts in a Tim Noakes Banting-diet guidebook.

We need to look at media from the consumer’s perspective:

But the vast majority of consumers do everything. They read. They watch. They listen. They interact and very often, they do it all at the same time or at least with no behavioural consciousness of shifting across channels.

As media strategists we need to analyse people’s content preferences and media consumption behaviour in order to discern their content priorities. Ultimately this allows us to break down the traditional media silos that are a barrier to holistic communication.

To start seeing the dynamics of the South African media platforms clearly, we can switch on our Socio-economic Measure (SEM) intel on the TV landscape.

TV viewing is ubiquitous in South Africa. 92% of all people (87% in the Traditional Market referred to as SEM_C1) have watched TV in the past seven days. What is intriguing is that this exceeds claimed radio listenership (87%) over the same period, which raises questions about that medium’s traditional claims to deliver inaccessible market segments not reached by other media.

Looking beyond the reach offered by TV allows us to assess the impact of the viewing platform and the holistic viewing experience on the impact of any advertising message.

On average over 90% of all homes have a TV set (80% in SEM_C1[2]) but the functionality of those sets varies dramatically across the SEM spectrum. 97% of SEM_C5 (Elite Market) TV adults that have viewed TV in the Past-7-Days have a Flatscreen/ HD set in the home, compared to 12% in SEM_C1. The inverse distribution pattern applies to Standard Box TV sets where they represent three out of every four sets (72%) in SEM_C1.

This has a significant impact on visual impact for any TVC.

The only media platform with reach levels to rival TV is the mobile device as 98% of all adults have access to a cellphone[3].

When it comes to cellphones, ultimately the real differentiator is functionality. Incidence of smartphones is at its highest in SEM_C5 (94%) declining steadily down the SEM spectrum. Even at the low-end of the market one in every two cellphones (49%) is a smartphone. 92% of people accessing the internet in the past week have done so using a smartphone while only 12% made use of a desktop or laptop computer.

Ultimately access to internet and always-on access via a cellphone totally redefines the nature of content viewing, and the concept of the lean-in single screen viewing experience is obsolete.

The vast majority of South Africans (95%) still watch traditional live TV broadcasts but the intrusion of subscriber TV and digital technology becomes readily apparent as we progress up the SEM scale.

In SEM_C1 only 12% of TV viewers watch some form of VDTV (Viewer Determined TV) or as it is sometimes known, TV on Demand (TVOD). Eight out of every 10 TV viewers in SEM_C1 (84%) are reliant exclusively on traditional TV broadcast format. Very few people are exclusively reliant on VDTV (3%).

The ratio of Live TV to VDTV shifts dramatically from SEM_C4 where 27% watch both TV formats. By the time we reach SEM_C5 the balance between Live TV and viewer scheduled engagement is almost a 50:50 balance. Much of this VDTV activity is still heavily fueled by the market dominant DSTV offering and even in SEM_C1 one in five viewers (21%) is a DSTV subscriber.

The continued erosion of DSTV positioning as an exclusive top-end TV viewing platform is clearly illustrated within the SEM segmentation model. SEM_C5 may still account for 62% of subscribers to the DSTV Premium bouquet but, overall, this segment only accounts for 16% of total DSTV subscribers. SEM_C1 (8%) and SEM_C2 (15%) collectively account for more DSTV subscribers than the top-end cluster.

Against this backdrop it comes as no surprise that the three most viewed channels on DSTV are SABC1, SABC2 and ETV. Outside of this mix, the first exclusively DSTV offering is Mzansi Bioskop which further illustrates the changing nature of the Pay-TV market.

These kinds of dynamics make it clear that from a content mapping perspective, it is vital to go beyond “cost out” size of audience considerations and embrace the unique “value in” contribution of individual viewing platforms and content offerings.

IN THE NEXT SEGMENT (6b of 8) OF THIS BLOG SERIES FOR MARKETERS WE REVIEW PLATFORMS IN THE CONTEXT OF CONTENT LISTENING AND READING IN SOUTH AFRICA.

MAKE YOUR TARGETS BY GETTING YOUR BRAND TO THE RIGHT AUDIENCE.

MISSED PREVIOUS READS IN THIS SERIES?