Too much process can kill creative agencies 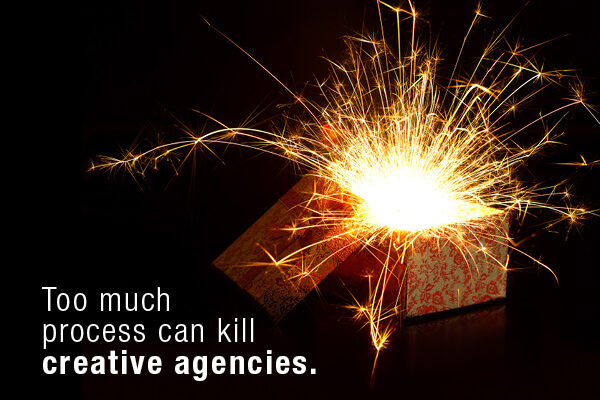 Ironically creatives need structure to have the time to be creative in the first place. They might not like this but it’s the truth.

The problem, is that the creative process can be so fragmented that agencies try and keep it lean, mean and profitable by throwing process in the way.

Whilst there is some merit in having operational procedures within an agency, it should not be at the cost of creative thinking, especially in digital media.

One simple process that would re-ignite the creative boundaries, would be a return to the very simple and “old school” approach, where media and creative actually work together as a team in the conceptual phase of planning.

Whereas, the current organisational structure of larger agencies puts creative, strategy and media in different silos. Its only when the creative concept has been signed off that the brief gets “chucked over the wall” to the media planners – who could have been far more creative – if involved sooner in the process.

Ideas for example that do not translate into cut down pre-rolls or messaging that has too many layers to be effectively conveyed in five frame digital banner.

This analogy is not new and you can see that things are improving where media is central to the campaign delivery. A recent example would be the “KFC Supper Time Stories”, which recently bagged Gold at the Loeries in Durban for Media Innovation. The medium was the bucket itself but was brought to life through an immersive family time experience on your mobile device.

We urge any agency to ask their media planners & strategic planners how many times they have worked as a team in the conceptual phase in the last three months. If the answer is less than once – then don’t be surprised if your campaigns never win awards.