Rise of brand empathy in a polarised world 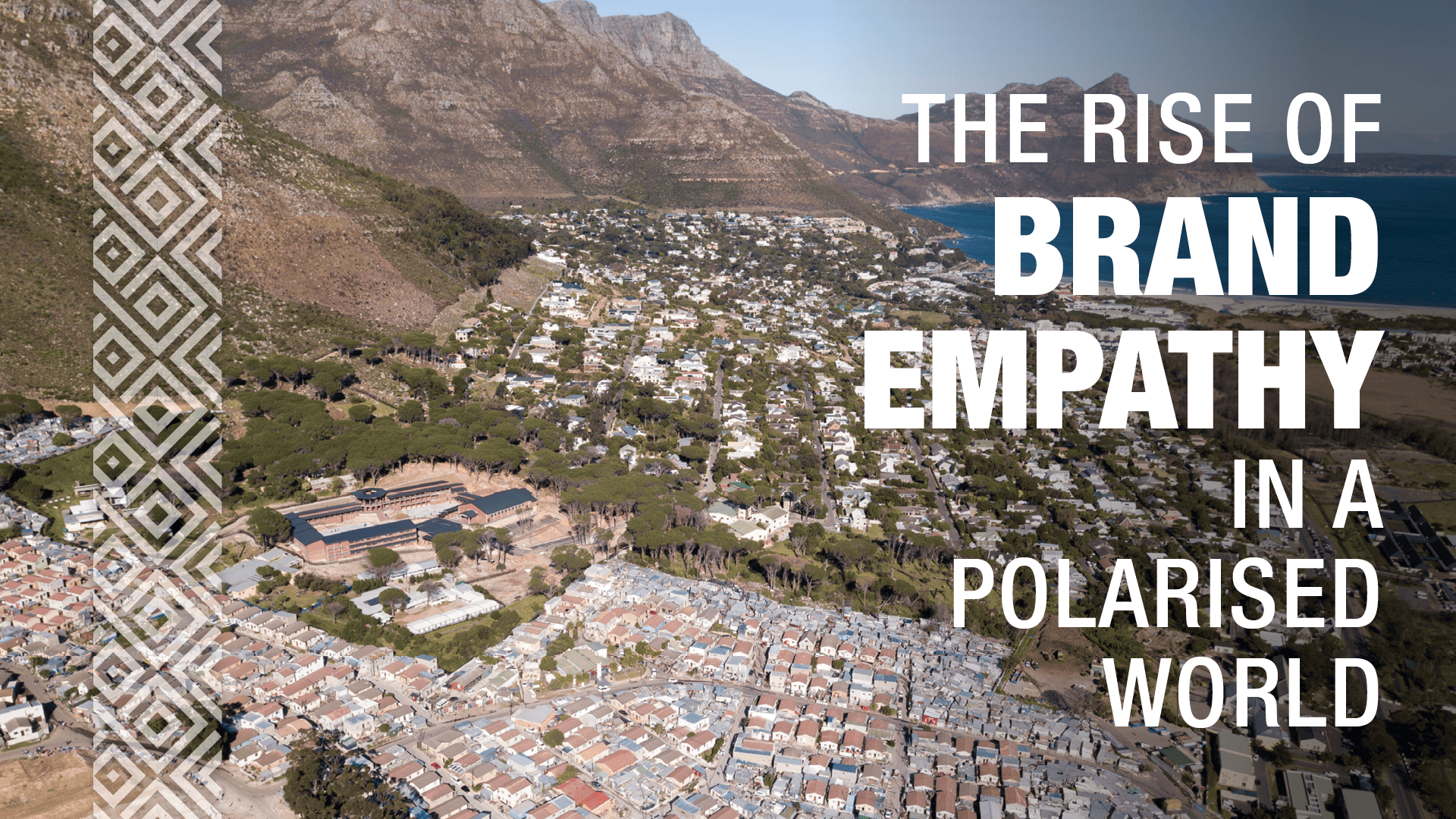 There’s a disconnect between what we’re told and what we know through experience. The disconnect may be strongest only at the fringes of what we see but a growing schism, in truth, remains. Our lived experience is contrasted with increasingly binary dialogue. There are only two available sides to every story, every issue, every event. Our beliefs are driven to polarity. You’re either for it or against it. Left or right. Diversity, gender fluidity, critical race theory, vaccination, universal basic income, sustainability, global warming, fats, meat, free education, free trade, quantitative easing, modern monetary theory, crypto, colonialism, the socialisation of debt, the meaning of work and even the pursuit of happiness are all more polarising than prone to constructive adult debate.

Our online experience drives our disassociation

Many argue that our online experience and communication is a factor driving this change. Social media has been criticised for furthering a loss of empathy, alienation and even anger. Empathy loss is attributed to a lack of visual contact, a lack of nuanced exchanges, the aggregation of complex emotions in simple emojis and the asynchronicity of exchanges on social media. There’s no consequence for “incivility”, as Christopher Penn calls it. This is the “disinhibition” effect of social media described by Dr John Suler1 — dissociative, anonymous, invisible.

The internet is an echo chamber

Online communications create an echo chamber of attitudes, beliefs and feelings. Social media and online algorithms encourage feedback loops that reinforce who we are through limited exposure to thinking outside our immediate group of friends and colleagues. It’s known as “out-group” exposure, with “in-group” referring to those close to us. Our ability to see and understand differences in people around us is reduced to binary stereotypes.

In fact, it’s been shown2 that persistent exclusive “in-group” proclivity is not only factionising but also economically constrictive. In-group exchanges are risk-averse and preclude exposure to outsized pay-off possibilities. The global growth in populist politics and protectionist economic policies bears witness to growing in-group myopia. This phenomenon “divides populations into belligerent groups with rigidly opposed beliefs and identities that inhibit co-operation and undermine the pursuit of the common good”2. With the absence of a common good and the polarisation on issues and politics, we witness trust as a casualty.

Our binary dialogue mirrors an erosion in trust

Loss of trust has reached an epidemic scale. The global Edelman Trust Barometer tells us that trust in government, institutions, business leaders and media is lower than ever, in part exacerbated by the covid pandemic. Three years ago, the 2018 Edelman Trust Barometer found that people selected media that reinforced their views. Since then, it’s reported a further “degradation of the communications infrastructure, resulting in a lack of quality information to enable the public to make fact-based decisions.”

The Edelman 2020 Barometer says: “As a result of this daily diet of distortions and counter-factual narrative, we no longer believe our leaders. Fifty-seven percent of respondents say government and business leaders purposefully try to mislead us.”

Prof Jennifer Freyd goes further in raising the uncomfortable spectre of institutional betrayal. Using trauma theory, she links the failures of institutions to deliver, as promised, to anxiety and depression3. This she calls a “betrayal of trust” (eg police brutality enforcing covid lockdowns).

A new phenomenon of gated institutional narratives (GIN) is emerging. First coined by Eric Weinstein, Thiel Capital head, GIN articulates the outcome of often heavily generalised institutional narratives as presented by the media and other commentators. Without access to “in-group” approval, we have little ability to counter GIN, even with valid proven information. Much of the global covid vaccination programme rollout has been advanced with this type of uncontestable sector narrative.

How do we make sense of our world?

The world isn’t like it used to be. A genie has escaped the bottle and we can’t push it back. More and more, we know this. Our challenge is sense-making. The institutional narratives, governmental failure and absence of leadership feed a myriad of issues and questions we grapple with daily.

Staccato social media bursts, asymmetrical media ‘information’ and the aggressive censoring of any voice outside the gated narrative exhaust  us. We try to decode the world on a daily basis as we rethink our role in the productive fabric of society. It’s in this world, too, that each brand’s narrative is summoned to resonate as aptly as it did a short while back. Many brands realise this. Many don’t.

A new brand leadership is needed

Brands need to add to sense-making by building assurance and security while acknowledging the uncertainty of our times. Naive positivity falls short in this environment and is seen for what it is — insincere, even fatuous. The tone of voice brands need now is rooted in authenticity and inclusivity, the message essence wrapped with a little humility.

Advertising has evolved through several phases and styles, from the use of feature-benefit messages and solution-based advertising to, most recently, the emergence of the challenger brand that seeks to change a mindset. It’s in the challenger typology that the next brand construct will likely emerge.

The idea of challenging a mindset (or any known opponent) will morph into a stronger need for customer allegiance and partnership in world where we face uncertain outcomes. Building a brand in the future will be more about an acceptance of unknowns rather than a conviction that we need to change something.

Brand authenticity starts at a foundational level in the brand narrative or construct. It will manifest in visible communication. A good example is the Allan Gray outdoor campaign claiming that you should “Throw time at your money”. The profound truth in this message is that all the expertise of money managers is less powerful than time itself. The essence is humility that speaks volumes to audience intelligence.

Contrast this, as an example, with the countless other growth promises from financial managers who know, as do we all, that South Africa has been trapped in a low growth environment for a long time.

The brand as a confidant

The successful brand as a challenger will morph into the brand as a coach, compatriot or confidant. Empathetic brand leadership will rise. The promise of brochure-style benefits that fit the boxes of the past are set to ring hollow.

Brands embracing adult-style discourse will recognise the need for flexibility, accessibility, and responsivity in their core narratives. Promises of a product-feature-laden tomorrow will ring less true than assurances that, even though we face uncertainty, we do so together.

Andrew Barnes is head of strategy and research at Ebony+Ivory. Much of his work over the years has contributed to the brand communication and new product development for companies such as Kellogg’s, Albany, Nedbank, MultiChoice, Tiger Brands, Sun International, Coca-Cola, Nampak, Ford, Tsogo Sun and more.