Fast track from brief to go-live 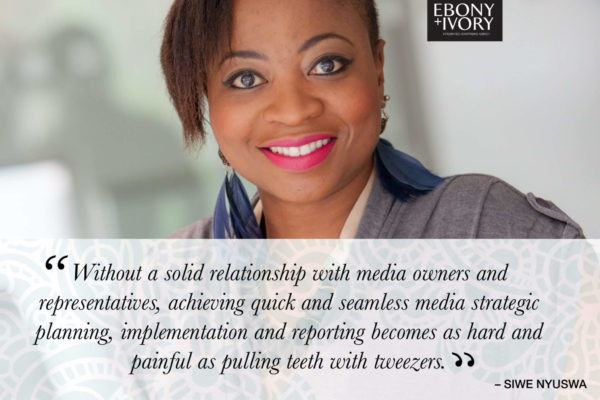 In the time-sensitive world of media strategy the planner’s network is equal to their net worth. The Ebony+Ivory media team recently proved this as it turned around a media plan to Black Entertainment Television (BET) Africa in less than 24 hours, proving too that great relationships with media owners make for great agency delivery.

It takes a long-term working relationship with media owners to make the circle of reach and frequency work, and work fast.

Responding to a brief from television channel BET Africa that called for a media strategy that could be presentation-ready in 24 hours, E+I demonstrated that the relationship with media owners is a critical enabler in the media planning toolkit. This relationship equips the agency with strategic agility, speed and the ability to seamlessly implement a media plan.

BET Africa is a television channel under Viacom International Media Networks, one of the largest media groups in the world encompassing brands such as MTV, MTV Base, Nickelodeon, Comedy Central, VH1 and Paramount. It is the definitive destination for youth engagement and entertainment, with a reach that exceeds 90 million homes across Africa, on both Pay TV and terrestrial platforms.

The brief called for E+I to prepare a comprehensive media plan for the channel’s biggest activation to date in the African territory known as the BET Experience Africa. For anyone not in media buying and planning, the strategy needed to not just recommend platforms through which to buy advertising space. All negotiations needed to be finalised and ready for the creative to be matched to the channels.

In short the go-live button needed to be pushed within 24 hours.

The agency delivered on the BET Experience Africa campaign because media owners were willing to work with them late into the night. As said by E +I media specialist, Siwe Nyuswa: “It is thanks to them that we could pull the biggest rabbit out of the biggest hat.”

The plan pulled out of the integrated advertising and media agency’s magic hat in less than 16 hours included a mix of radio, outdoor and print. In the lead up to the event E+I also presented the team with creative and innovative ways to get the audiences to connect, engage and attend the first BET Experience Africa event that took place on Saturday, 12 December 2015.

Most of all the fact that Ebony+Ivory could turn around a solution at this speed speaks to the network of the full-service advertising agency.

The project brought together the collective intelligence and experience of the team, whose diversity opened up a pool of audience insight and media knowledge. Together with respect-based media relationships, this put E+I in a position to select the best solution for BET Experience Africa event in one day.

It was a great day for media strategy.