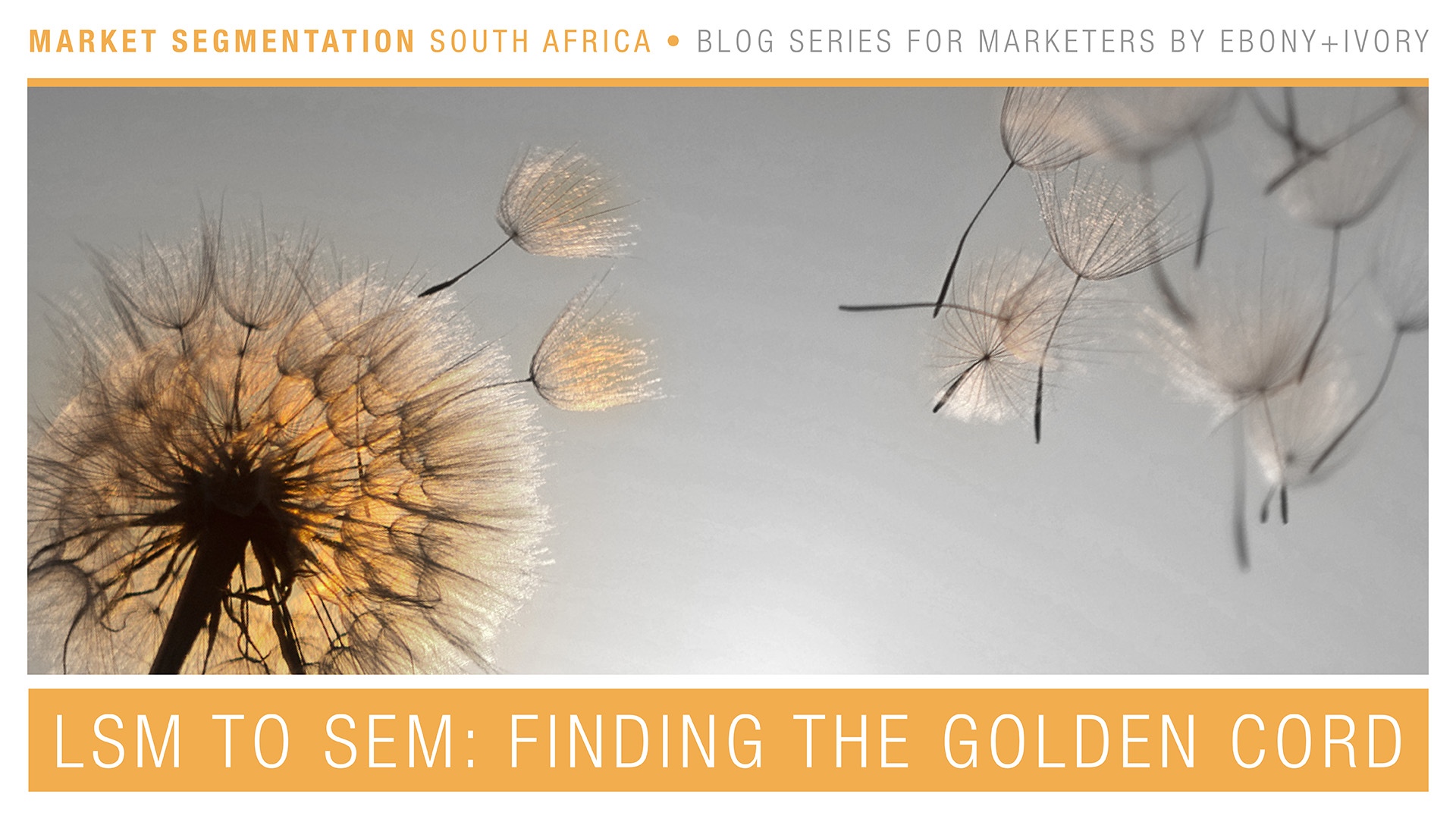 Although the post-AMPS media data landscape may look and feel a little different to marketers, all the data traditionally used for market segmentation to inform media strategy and media planning are all still readily and freely available to marketers and media decision makers in South Africa.

One of the most consistent segmentation methodologies emerging from AMPS over the years was the widely used socio-economic segmentation tool known as AMPS_LSMS (Living Standards Measure).

In 1989 LSM was used for the first time. Using a list of 13 household variables (ranging from incidence of households appliances, motor vehicle ownership and geo-location) the initial 8_LSM segment model was developed. These initial eight LSMS were most often deployed into secondary clusters or Supergroups.

A perception that needs to be challenged is the belief that AMPS LSM has always represented a stable and unchanging lens on market segmentation in South Africa. In reality the LSM typology has been a fluid and constantly evolving mirror on the marketplace.

AMPS LSM was never intended to represent an immovable fixed point and during its 30 years of evolution, the variables used to create the primary LSM groups also underwent consistent revision. SAARF (South African Advertising Research Foundation) made this observation about the LSM model.

The market is not static but dynamic and changes can take place rapidly. A model which is useful now may soon be outdated if it is not revised regularly.

As a result the variables used to create the LSM model were constantly assessed and updated over the years. In 1997 for the first time, the LSM model was revised to reflect 10 segments and the Supergroups were adjusted accordingly. There was no absolute convention for creating these secondary clusters or Supergroups, and they varied from marketer to marketer, and media-owner to media-owner depending on which combination provided the most advantageous perspective.

Evolution of Supergroups and Clusters

By 2008 the most widely interpreted cluster model was

In 2008 the LSM framework was further sliced and diced to reflect a smorgasbord of 14 discernible LSM segments. In 2013 a further subdivision of the data created 17 discernible LSM segments and in the final AMPS database (AMPS2015), despite the persistent reference to 10 LSMS, there were in fact 17 primary segments which in turn needed to be clustered into Supergroups.

By the time the industry got to AMPS_2015, the original 13 variables had become 27 very different predictive variables. For instance, obsolete variables like “VCR” and “HiFi Centre” had been replaced by more agile predictors such as mobile phone and PC ownership.

It is beyond the scope of this text to expand upon every stage of LSM evolution over the past three decades but for AMPS LSM, the Muller Cluster Model has provided the most functional and effective Supergroup cluster solutioni.

This cluster model is more easily visualised when juxtaposed against a Rural vs. Metropolitan geo-location continuum. 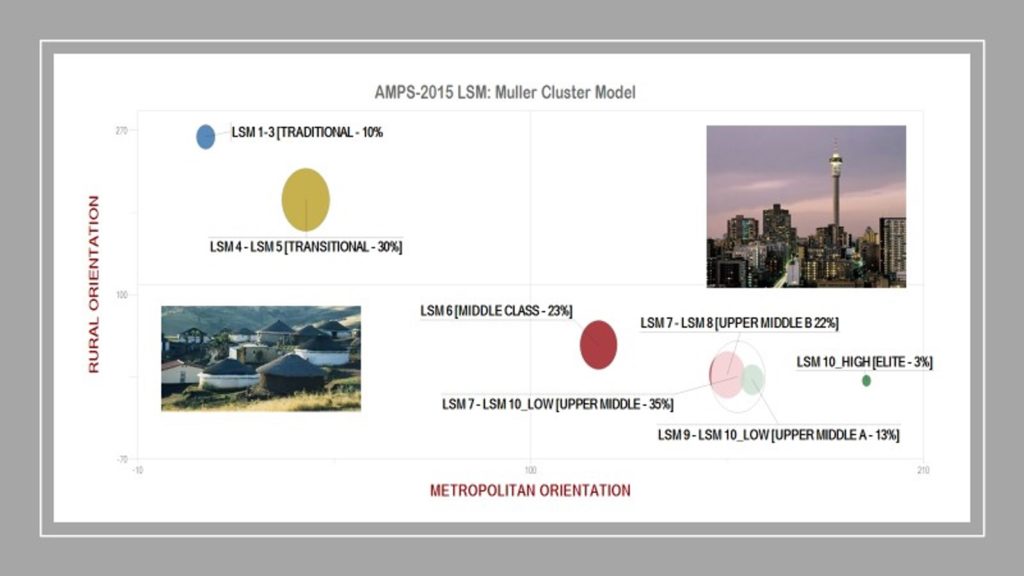 To a large degree the prevailing LSM typology has been rendered obsolete by quantum shifts in the market place which are no longer accurately reflected by the 27 AMPS variables.

Many of the LSM variables are actually now contra-indicators of the original attributed value. For example, is a DSTV subscription really a predictor of high end wealth? Having a DSTV subscription was once an indicator of top-end of the market status. Given the erosion of the DSTV subscription costs and the rapid expansion of streaming services, this is no longer the case. Having a landline “home phone” was a top end indicator in AMPS_LSM but most top end households today have dispensed with a landline in favour of data driven OTT services.

Evolution to SEM in market segmentation

Post-AMPS we have seen the development and adoption of the SEM (Socio Economic Measure) market segmentation tool. At a functional level SEM represents the most recent iteration of a national socio-economic segmentation model and it fulfils the same macro segmentation function as LSM.

SEM uses a different set of variables (14 variables in total) to compute the various data points and clusters. For instance SEM is not as heavily dependent on households durables and technology items, as the historical LSM had been. There is also a stronger focus on fixed structural items, such as household building materials and access to amenities such as water and toilets.

Other lifestyle indicators, such as home security systems and ownership of a motor vehicle, are also built into the segmentation model. Another key point of differentiation is the removal of media consumption as a weighting variable to avoid data contamination in media planning and decision-making. Despite these points of difference 9 of the 14 variables deployed as predictors in SEM are in any event totally consistent with AMPS_LSM.

The SEM data continuum is further broken down into an initial 20 cells (not 17 as was the case with LSM). The next step is then to cluster these SEM datapoints into a usable framework, which is both statistically reliable and sufficiently agile to create nuanced insights.

Once again the Muller Cluster Model provides the most effective means of engaging with SEM data. 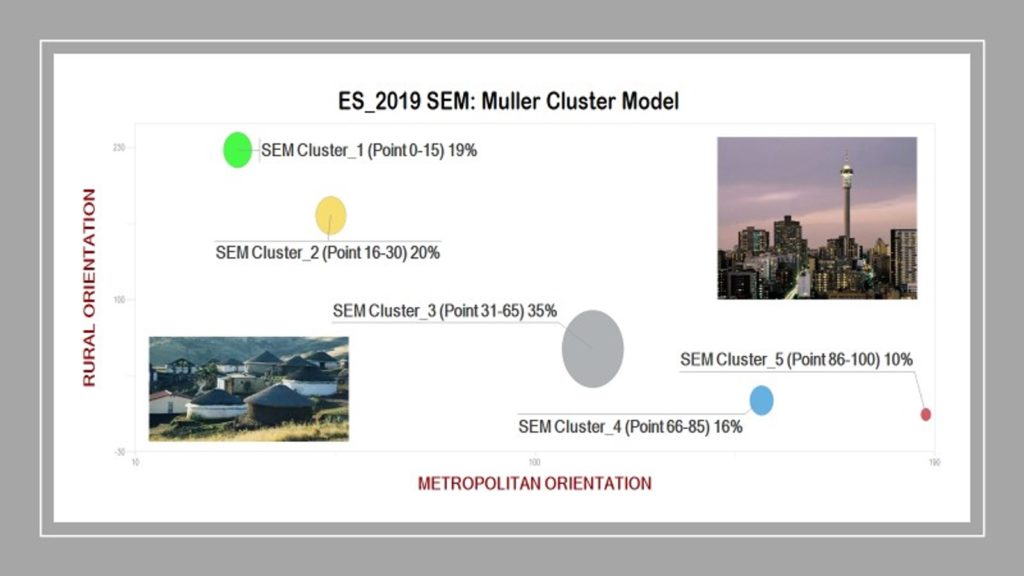 Over the next modules the Ebony+Ivory insights team will create a framework of usable insights for each one of the 5 SEM Clusters, ranging from the Traditional Market (SEM Cluster_1) to the Elite (SEM Cluster_5). These clusters will unlock the latent value in the available pool of data and allow marketers and advertisers to draw from the old LSM typology into the SEM equivalent and position their brands and campaigns with confidence.

SPEAK TO US TO ARRANGE YOUR MEDIA + MARKET SEGMENTATION WORKSHOP.